I thought riding a bus in Nepal was scary, but I was wrong: riding a bus in Ladakh is the way to white knuckles. The main highway from Leh to Kargil (in the west of Ladakh on the border with Pakistan) is a one-track road, sometimes paved, sometimes not, that seems to have been constructed by and for yaks. Luckily there’s not much traffic this time of year, although if there were maybe the drivers would take the blind corners less cavalierly? 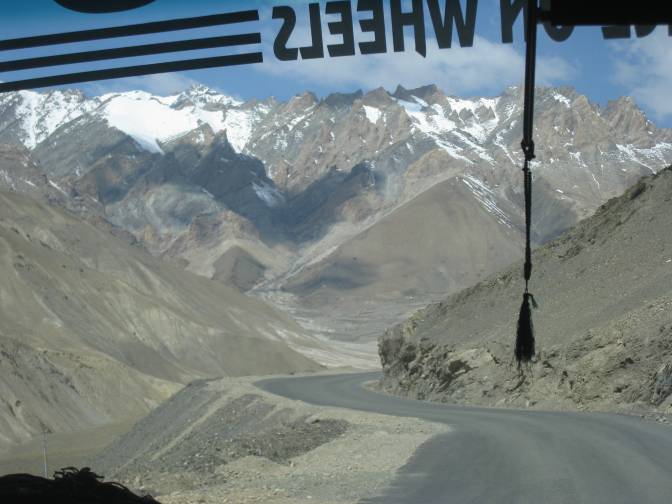 The scenery is among the most dramatic I have ever seen: shifting vertical and horizontal rocky planes of every color imaginable interspersed with stark sand deserts under deep blue skies, monasteries clinging tenuously to cliffs. Above 12,000 feet there is very little vegetation, which adds to the otherworldly effect, but coming down into Kargil all of a sudden there appear sweet green river valleys: tall straight poplars, willows, lush grass, apples in bloom.

I got on the bus at five in the morning (as if there were any other time for an Indian bus to depart?) sitting right behind the driver, wedged with a family of four into three seats. The driver and conductor decided I was their charge, inviting me to breakfast with them at the halfway mark, then waiting with me in Kargil until I was delivered into the hands of my homestay.

The homestay was arranged by a travel agent in Leh named Zia; I soon found out that it was Zia’s own family who I was to stay with, and it was his 18-year-old nephew Nissar who eventually shuffled his way into town to pick me up. I didn’t know what to make of him at first: a typical 18-year-old he was perpetually doing something with his mobile and he walked quickly in front of me as we made our way through town to a village on the outskirts. He was clearly uncomfortable with me, and I began to regret the idea of the homestay. When we arrived at his house no one was home. I said I would take a walk and arranged to meet him again in a few hours.

I set out up the river on a road that eventually leads to the Zanskar valley, although apparently the pass is still closed in May.

I regretted immediately that I had brought nothing to cover my head, as Kargil is predominantly Muslim and every woman I saw was wearing a headscarf. But the people were as friendly as in the rest of Ladakh (i.e. ridiculously friendly). Most didn’t speak English, but I got the gist of the old women asking me where the hell I was going. Two young men eventually fell into step with me, wanting to practice their English. One worked as a teacher in fifty kilometers away in Dras, which he claimed was the second coldest place on earth; the other was still in high school but planned to go to college in Delhi. I brought my ‘ailing husband’ out of storage, realizing I hadn’t used him in almost two months since I’d had people to travel with. They took me to their house and fed me noodle soup which I felt duty-bound to eat even though I’d just had lunch and was expecting dinner shortly. I drew the line at the cold water they brought me, however. I agonized about whether it would offend them if I didn’t drink it, but having been so incredibly sick so recently I felt I had to put myself first. 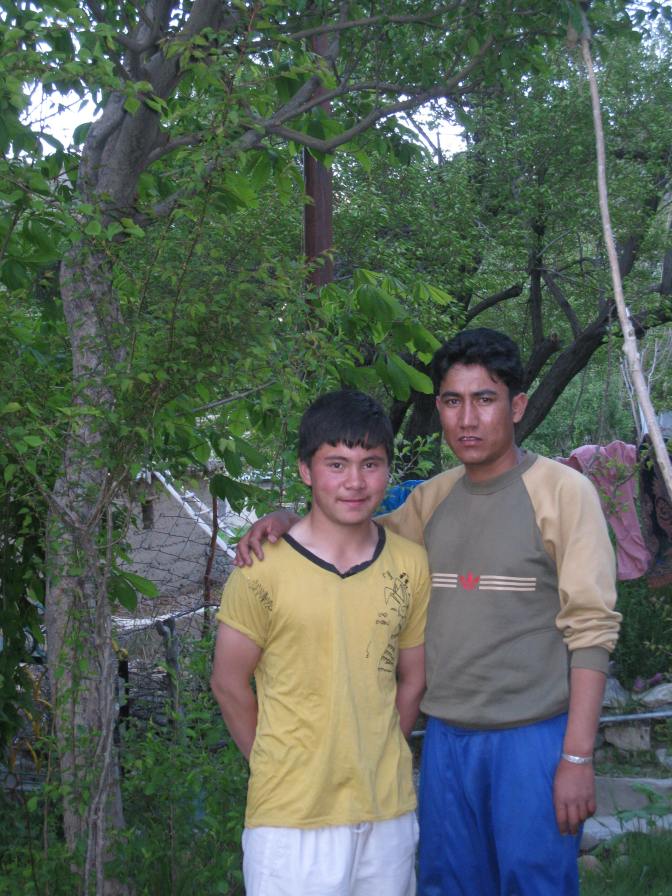 Walking back down the road I ran into a worried Nissar — apparently I had walked more than 10 kilometers. He had found out that there were no share jeeps leaving Kargil in the morning and that all the buses were booked up, the reason being that everyone was celebrating the results of the recent election. There had been two candidates for MP from Ladakh, and the one from Kargil had won. The only possibility for me to leave was to take a taxi, which would cost me 3000 rupees for the five-hour trip to Lamayuru, where there is a particularly spectacular monastery. Nissar evidently assumed that I would stay another day, but I panicked: what would I do in Kargil for another day and how uncomfortable would I be in the homestay? I told him I would take the taxi; he would have to go back downtown to book it.

Arriving back at his house I was introduced to his parents and given a cup of tea, then Nissar took off, leaving me to make stilted conversation with his father. After sitting in painful silence for a while the father asked me if I liked television, as there was one in the kitchen. I motioned that I thought television was the best thing in the whole world; with evident relief we moved to the kitchen and turned on the Discovery channel. Sitting on the floor we watched leopards and snakes until dinner was ready some two hours later. (Chairs are not common in Ladakh; you sit on the carpeted floor for everything including eating – you leave yours shoes out in the main corridor and slip them on to move between rooms.)

I was introduced to the traditional Ladakhi toilet, a room on the second floor (which is where all the other main rooms are, the ground floor being reserved for animals) with an open hole in the dirt floor. The room below opens to the outside, so mucking it out becomes fairly simple. You do your business, then you shovel some dirt on top of it. It doesn’t smell much at all and is environmentally sound. It is also, if you are honest enough to admit it, pretty fun to watch whatever you do fall eight feet.

At nine-thirty I was very tired and still feeling uncomfortable. It became clear that the room I was to stay in belonged to Nissar, and I couldn’t say no when he asked if I would mind if he slept there too. They had conjured for me an ancient camp bed that basically consisted of a board on sawhorses, so hard that I envied Nissar’s customary place on the floor. But I fell asleep immediately and didn’t wake until the sun hit my face at five.

In the morning everything seemed different and I was all of a sudden sad to be departing so quickly. Even though Nissar’s mother spoke no English she managed to communicate how lovely she was, and we had a great time grinning at each other in between watching men with long hair in spangled tights threaten each other theatrically with folding chairs (on the TV — ain’t globalization great?). I suppose a lot of things are like this – you have to endure some initial discomfort in order to get to the good stuff. Before I left she stuffed my bag full of her own dried apricots (rock hard and sugary as is the style here) and told me to come back soon. I shoved some money into her hand which she tried hard to refuse.

Uncle Zia had commanded that Nissar accompany me in the taxi to Lamayuru, and besides the taxi driver didn’t have a partner and didn’t want to make the trip alone. The evening before I was annoyed about it, but in the morning I was glad, as he had relaxed a bit and was becoming good company. There was a fair bit of singing in the car and they were good-natured when I made them stop repeatedly for photographing. It took us six hours to reach Lamayuru. Nissar put me into the guesthouse that Uncle Zia had specified, then they set off back along the road to Kargil.

In the afternoon I took a long walk down the road to see a rock formation called Moonland which was made when the area was a lake several gazillion years ago. Coming back up the road I was asked by a pack of Indian tourists what I was doing. “It seemed weird that you were walking alone,” one said. “Americans are weird,” I replied. Maybe we are – because the light conditions were so interesting, I took a number of bizarre photos of my shadow. 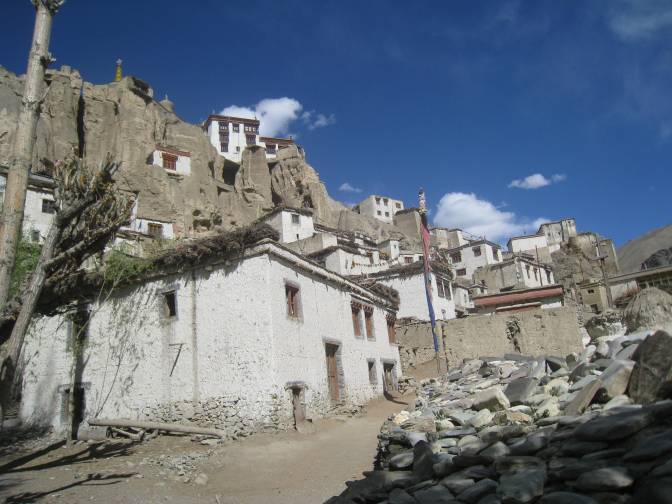 For dinner I sat on the floor of the kitchen while several Ladakhi women cooked, chattered loudly amongst themselves, and drank several hundred liters of salt butter tea (which tastes like it sounds). This time I was perfectly comfortable being ignored; I watched and listened to them, ate my noodle soup and went to bed. In the morning there were all of a sudden children everywhere. One adorable ten-year-old with perfect English told me that the five children had returned the night before from Dehra Dun (on the other side of the Himalaya) where they were in school all year. They hadn’t seen their parents in f

One thought on “Trip to Kargil”