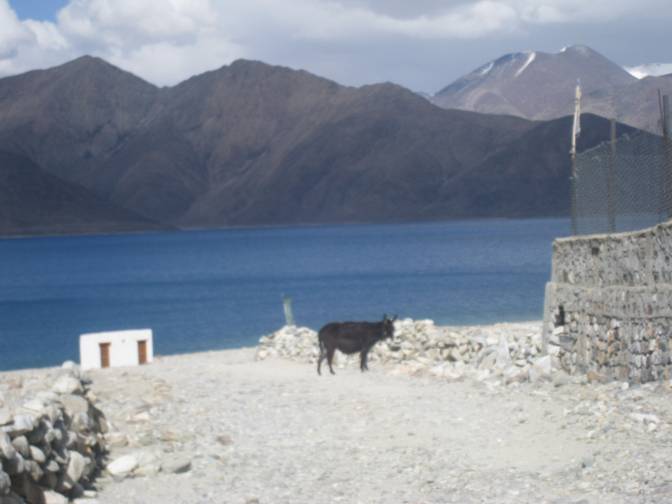 I may have just been to the most beautiful place on earth: Pangong Tso is a salt lake that straddles the India/Tibet border at around 14,500 feet. Long and thin and surrounded by red rock cliffs and snowy peaks, it turns color from light green to turquoise to deep blue to purple every few minutes, depending on the light conditions and cloud shadow.
The road to Pangong passes over the Chang La, third highest motorable pass in the world, and is maintained by the ‘Mountain Tamers’ regiment, whose primary duties seem to be snow clearance and serving complimentary tea (if you can judge by the bored-looking young Punjabi soldier in the hut at the top who plied me with said tea). Very few people other than military live in the high valleys beyond the Chang La because the land is so inhospitable.

We (my share jeep companions much more congenial this time – German Jochen and Filipino Ricardo) stayed in a homestay in a village of nine houses at the far end of where tourists are allowed. Or rather I did, as Jochen and Ricardo had their own tents, which they pitched in the garden even though the temperature dropped to minus five celcius overnight. I thought I was the lucky one until I went into my bedroom to sleep and found the walls literally covered in black beetles (and a few worms for good measure). I shook beetles off the bedding and moved the bed into the center of the room then put on all my clothing in an attempt to cover my skin. I slept well, however, and if beetles danced all over me in the middle of the night I didn’t notice.

We had arrived in the early afternoon, starving, to find a tiny settlement with little movement other than some people tilling a field in the distance. We asked the woman at the homestay if she would cook for us; it had begun to snow, so we sat on the carpeted floor of the kitchen for several hours while she prepared dal and rice. Eventually the room filled up with villagers, mostly elderly-looking. Apparently the deal is that everyone works everyone’s fields and lunches at the house of the person’s fields they are working that day. As we sat we were offered some of our host’s home-made cchang – local wine. I was wary, having tasted Nepali fire-water, but was assured that Ladakhi cchang wasn’t as strong. So we had one glass, and it was cold outside, so we had a few more. I won’t go on record saying it was precisely good, but hungry on a cold windy afternoon being stared at by old Ladakhis (though to be fair many of them were falling asleep in their soup) and not having had a drink in two weeks, it did hit the spot. Tasted like a cross between wine and beer: an acidic front with a barley aftertaste. 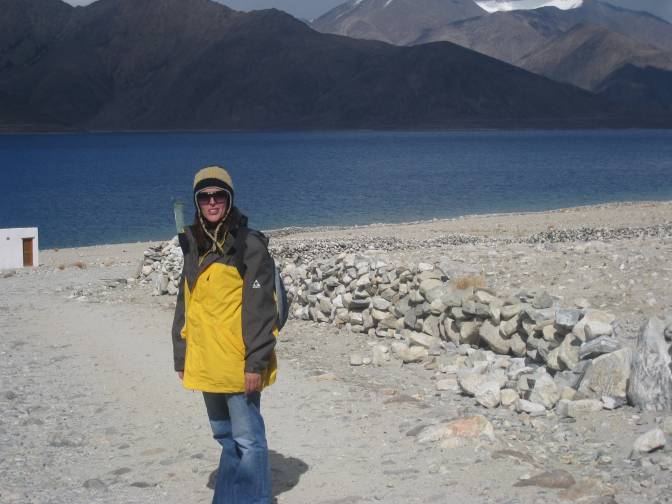 The sky cleared and we decided to walk off the cchang. Braced up, my ankle was feeling a lot better. We took off along the lakeshore, expecting to be stopped by guards within half an hour (our Inner Line permits and passports had been examined at length numerous times along the road) but two hours later we had seen no one other than two Red Cross jeeps. It grew steadily colder, but the color of the lake fascinated us. It was like Mediterranean water transplanted to the roof of the world. The cliffs glowed red-gold in the setting sun while the peaks behind went blue.
Ricardo was wearing shorts with only a scarf wrapped around his legs and we realized we were five miles from the settlement, so we reluctantly turned around. My ankle had begun to throb with my stupidity in coming so far, but it was worth it. It was so beautiful.

One thought on “Pangong Tso”