Another #&% early-morning bus, this time to Gaggal (pr Guggul), where the travel agent who had spent what seemed like hours uncomfortably hitting on me while I waited for him to book me a train ticket had claimed there would be a direct bus to Amritsar. There wasn’t. But at least I was on the six o’clock bus, not the four o’clock one I’d originally planned, and I saw the sun rise in clear skies over the shy snowy peaks behind McLo. Apparently my great-great-grandmother was born somewhere around here, but that’s all I know about it.

There are military bases all over these hills. Proximity to both China and Pakistan makes it prime territory, though the mountains to the North give some protection (but also isolate Ladakh, as India found to its chagrin with the Chinese incursion in the 60s). Around the walls of the cantonments (amusingly abbreviated CANTTs) are arrayed painted tanks and billboard advertisements for the bravery of the troops. I saw more entertaining road signs: ‘If you’re married divorce your speed!’ A painted sign in the interior of the state bus to Pathankot reserved seats 4, 5, and 6 for VIPS and the Press. Umm, yeah.

Down in the plains, the Punjab reminded me of the Californian central valley: flat and green, with a heavy smell of fertility. Faces were once again very Punjabi, leaving me with the conclusion that the difference in the mountains was due to the Tibetan refugees. In fact, more than half the men I saw wore Sikh turbans, which I have been told take up to two hours to put on, though I’m still having trouble believing it.

It was a rookie mistake coming to Amritsar on the weekend. It’s the Sikh community’s most holy place, so weekends are crazy packed. I was feeling very tired from my third 10+ hour bus ride of the week, so was ill-equipped for the crowds and noise, especially after the peace of the mountains. Instead of going to see the Golden Temple in the afternoon I fell asleep at five o’clock and didn’t wake up until six this morning.

The temple complex was probably less crowded at 6:30 than it would have been later, but only marginally. There was a feeling of celebration in the air, though I think it’s just a normal weekend. There were loads of individuals but also huge groups of men and women dressed all in orange, white, or black, each with a dagger at the waist and holding a ceremonial sword. (Aside: I can understand how it would have been difficult to see immediately that someone was arming the temple as Bhindranwale did due to the amount of hardware that comes in and out of here on a daily basis.) 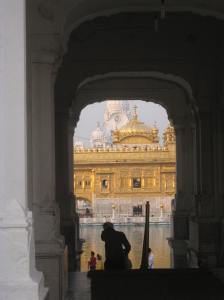 You leave your shoes at a depository then enter the complex through an enormous white gate, bathing your feet in a shallow trough of warm water and covering your head as you go. Down an impressive set of white marble stairs is a promenade around an enormous water tank with bathing steps, at the center of which is a two-story golden pavilion accessed by a causeway. All touchable surfaces are made of white marble with colored inlay patterns. You process clockwise around the tank toward the temple, and there is a coir mat to walk on, but I noticed a number of people slip on wet marble as they tried to bypass those in front of them. One man seemed to hurt his back rather badly, and some men brought him holy water from the tank to drink. Others were taking a ritual bath, shivering men stripping down to their briefs, while the few women I saw bathing did so fully clothed.

In a few hours I will get on the slow train to Delhi (watching my pennies..) to meet my friends Eric and Holly. All I can say is thank goodness it’s not another bus!!!