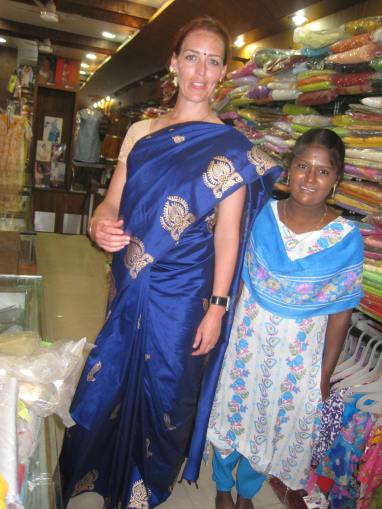 Bought my first sari yesterday. I’ve heard so many people say that saris are too hard to put on and that westerners shouldn’t anyway because they just can’t pull it off. Well, I have the sort of cussed personality that makes me get annoyed when people say I can’t do something. So off I went to the biggest sari emporium in Trichy. Just to put this in perspective, when you travel around India by far the most advertisements you see are for saris (the second most prevalent are for jewelry). When you think that 500 million people wear them every day, you’ll realize that there are one hell of a lot of saris available. I’d been eying them for weeks, so at this point I had ideas about what I wanted: a mix of cotton and polyester so it doesn’t wrinkle easily, a bright color but dark enough not to show sweat stains, and a fair amount of gold. I came out with the above – a royal blue with a printed gold motif – for 275 rupees. One could pay as little 150 or as much as 15,000 in the store I went into. I imagine that in a bigger city it would be possible to pay a lot more, but as the 15,000 rupees saris were incredible, I think you would have to have actual gold thread and precious stones embroidered into the cloth to make it more special.

The emporium I was in did not sell ready-made blouses. Most women have their blouses made from the same material as the sari; this is a country where tailors are still more prevalent than ready-made shops. I haven’t quite figured out yet whether there’s enough to take it out of the 5 or 6 meters you get or whether you’re supposed to buy extra material. I’ll find out next time.

In any case, I went next door to a ‘matching centre’ to find a blouse that coordinated. The salesgirls (three of them) giggled a lot, and when I finally managed to communicate to them that I needed help putting it on, their faces lit up. We trouped upstairs to a closet, as they didn’t have a dressing room (many places don’t – you just have to know what things generally look like) where the girls proceeded to wind me in fabric.

There seem to be many ways to wear a sari, depending on whether you live in a city or the countryside, how fancy you want to be, what state you live in, and probably a host of other variables I don’t understand. In any case, the way they put me into it looks like the way I’ve seen mostly on television, so I think it’s a fairly fancy style. I probably look like an idiot to modern city girls (many of whom are now wearing t-shirts and jeans) and westerners, but I’m more concerned about attracting less attention from touts and other unwanted males.

But less attention is not what I got: as soon as I walked out of the shop I felt like there was a gigantic spotlight on me. However, the attention seemed to be all positive, people smiling at me and telling me how great I looked. I also acquired a red dot between my eyebrows and some flowers for my hair. I think the red dot signifies that you’re married, although I’m still working out what all the marks mean. Some are clearly caste marks; others mean that you’ve just come from the temple; others may be purely decorative. There are flower-sellers everywhere: for 10 rupees you buy a string of jasmine or roses, and the lady hooks it into your braid. I had been enjoying how fresh and pretty it looked but hadn’t realized how functional it is: it wafts fragrance at you unexpectedly every few minutes of the day, counteracting the bad smells you constantly come into contact with. My nose is now (unwillingly) almost conditioned to urine smell. 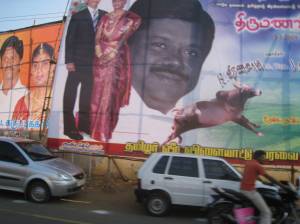 I took the bus from Trichy to Madurai in the afternoon, about three hours through the flat, fertile Cauvery River delta. Approaching Madurai the landscape suddenly became dramatic, with volcanic outcroppings and huge piles of granite boulders. Twenty kilometers outside of Madurai billboard-size posters appeared, advertizing the ‘King of Granite’s daughter’s wedding’. They featured the beaming bride and groom (at about three times life size) and heads of other (presumably) family members, including the Granite King himself. In the rickshaw from the out-of-town bus station into the center I asked the driver about it, and he said that Sunday (today) was a very auspicious day for weddings. He said that five crore guests ( 50 million) were invited to the Granite King’s celebration, and that the city buses would be free that day and there would be free food passed out. I’m not sure I exactly believed him… And I couldn’t understand everything he said – free food for how many people, etc. but it was clear that the Granite King was spending a whopping amount of money. We passed by the hall where the wedding was to take place; it was lit up with thousands of colored lights.

I was lucky to find a hotel room in Madurai, what with all the weddings taking place the following day, especially at 185 rupees for the night, the cheapest room I’ve had so far. It wasn’t the cleanest or quietest place I’ve been in, and it had a nasty looking bathroom with a squat toilet, but I was tired and knew my options were limited. I considered the idea of sleeping in my sari, as I was afraid I would never be able to put it on again myself. Then I thought of hiring a woman in every city to come in the morning and dress me. I came to my senses and carefully unwrapped myself, taking care to understand the folds, then practiced putting it on a few times. I’d like to think that I can do a competent job of it now.

In the middle of the night I came to understand the perils of the really cheap hotel. It wasn’t the light or the noise; I had those sorted with an eyeshade and earplugs. It was the bedbugs. I’d heard about them but hadn’t really believed: let me tell you it’s true. I felt myself being bitten and got up to put on bugspray and went back to sleep. In the morning I began to itch and found that I had been bitten hundreds of times, mostly on my feet and legs, but also on my arms. I abandoned the sheet I’d brought from Britain, as I know that you can transfer them to your own belongings; I isolated what I was wearing to be washed thoroughly, but now I’m paranoid about their staying with me.

I didn’t hear of any forced marriages yesterday. The Karnataka government took into pre-emptive custody about 300 Sri Ram Sene members who they termed ‘anti-social elements’. At first I wasn’t sure whether I agreed with this action, but when someone tells you over and over that they’re going to do something and they have a history of unpleasant actions, I suppose it’s best to believe them. And they have done real harm: recently a 14-year old girl who had been humiliated by the Sene for fraternizing with a boy on a bus (talking to him in the company of another girlfriend) committed suicide because she was so ashamed.

Today I rode the bus from Madurai to Enakulam, a nine-hour journey over the Western Ghats (although I had considered staying and trying to crash the Granite King’s daughter’s wedding). I got lucky this time: the bus wasn’t full, so I had two seats at the front to myself for most of trip, with space for my backpack and to stretch my legs. Being able to see out the front window was a blessing and a curse: wonderful to see the view, but scary to watch how many children/cows/goats/rickshaws we nearly plowed through. At one prolonged stop a gentleman got on and began declaiming loudly about something or other. Eventually he held up a bottle, on which I could read ‘body pain oil’. He proceeded to take out a piece of Styrofoam and pour the oil onto it, whereupon the Styrofoam melted. I can imagine that it does indeed cause body pain, although why you want to buy it is beyond me.

When we stopped for lunch I joined the line for the toilet, then was unhappy to find out that it wasn’t even a squat – it was a cubicle with a drain in the floor. Lunch itself was the second meal of the day I had eaten with my hand off a banana leaf; this was mainly rice, as I couldn’t stomach the fried fish on offer, and indeed have been eating mainly vegetarian since I’ve been here. More on that later.

I noticed a difference as soon as we entered Kerala. I’d read that it’s the wealthiest state in India and has by far the highest literacy rate and lowest child mortality, but I didn’t expect to immediately see the prosperity. There is still trash on the ground but not nearly as much of it; most of the bodies of water look fairly clean, or at least not dangerously polluted like elsewhere in India; the majority of the houses look like they’ve had some maintenance and even a fresh coat of paint in the past few years. 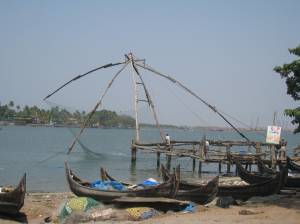 A dear, well-meaning relative of mine was concerned that I was entering a Communist-dominated area. I’ll admit that when I was growing up in the 80s I knew it was only a matter of time before the Russkies dropped the bomb and we would either die immediately in the fire or agonizingly slowly in the nuclear winter. (Aside: this assumption may be a reason why Generations X and Y have trouble with delaying gratification: if we were all going to die anyway, why shouldn’t we spend the time playing video games? It’s at least a pretty good excuse, right?) I never would have believed that in 2008 I would spend the European Football championships rooting for the Russian team, wearing a Russian jersey, sitting next to one of my dearest friends — a Russian woman. (And politely ignoring the fact that the Russian team’s cheer songs, let alone their soccer skills, were vastly inferior to those of the Spanish team.) But I’m not worried about communists in Kerala these days. The hammer and sickle are everywhere, but so are wealth and bookstores and advertisements for other political parties. My impression is that the Communist party had to lose their bite in order to be democratically elected. It seems to me that they are more Socialist than Communist; I will report more on this when I understand it better.