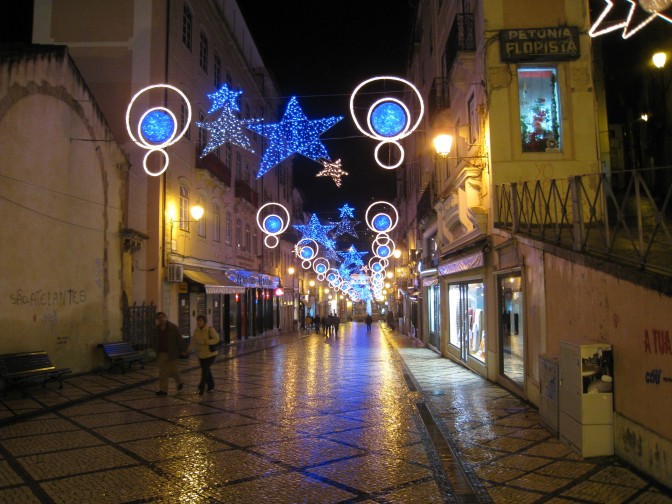 I took a quick trip to Portugal over the new year. One week isn’t nearly enough to see a country, even a relatively small one, but here are a few surface impressions:

1. The people are incredibly mellow and friendly. It may have had something to do with the fact that I was there with a Portugese speaker, but I could not believe how hospitable everyone was. We weren’t allowed to lift a finger for meals, our beds were made for us, and we were encouraged to borrow a car. I may have finally learned what real hospitality is. The next step is to implement it, which is a bit harder. My style of hostessing has always been to encourage people to feel at home — i.e. do it themselves. When I throw parties, I wait for the first guest to arrive, then put him to work. Hmm.

2. The food is delicious and as considered as it is in France, Spain, and Italy. A nice change from Britain… It’s also half the price one pays in Britain. Of course, salaries are lower in Portugal. A couple, both of whom are teachers, told me that they earn a combined income of 1000 euro per month. Compare that to my sort of medium salary of 2000 pounds per month after tax (ok not any more… no income for me for quite some time). 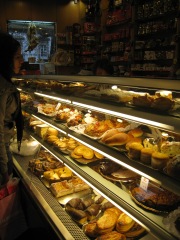 Back to the food: they’re big into meat and fish and potatoes. The only problem for me was that green vegetable and salad don’t make much of an appearance in restaurants there. But you’ll find on every corner a ‘pastelaria’ — a bakery with a cornucopia of cakes and sweets — and it’s considered normal to sit down to coffee and cakes at 5 or 6 every evening. You don’t eat dinner until 9 or so anyway.

3. The Portugese like to decorate EVERYTHING. In the cities the exteriors of buildings are covered in tiles. I even saw high-rise buildings with a tile cladding. They must make panels of tiles, because I can’t imagine a guy on a scaffold hanging out laying 12 stories of tile. This penchant for ornamentation shows up big time in the Christmas lights and decoration. Every street of every town must have been competing with each other for best lighting, but what I liked best were the half-size santas hanging from scores of windows and balconies.

4. Unfortunately the ethos behind the beautiful Christmas lighting does not extend indoors. It’s admirable that the Portugese take saving energy so seriously, but it’s a shame that such gorgeous buildings are spoiled by ugly fluorescent lighting – basically everywhere. When lamp manufacturers finally come out with a super low-energy lamp that looks like an incandescent we shall all be saved, but until then I will continue to feel sick under tube lights. One other strange thing: even in winter, when the sun is not strong (in fact it rained the entire week I was there) people don’t seem to open their shutters much. They’ll sit in almost complete darkness in their living rooms during the day. This can only be the product of a people who get quite enough sun already, thank you very much. 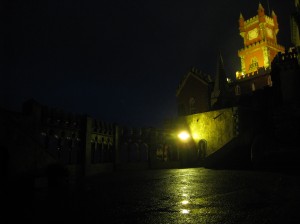 5. But speaking of gorgeous buildings.. every town has a castle and church worth seeing. There’s also some very good modern architecture, although the suburban houses look the same as every faceless box in Europe. We went into Koolhaas’ Casa da Musica in Porto, which I was only semi-impressed with. The best part of it by far is the undulating hardscaped plaza outside which is actively used by skateboarders, seemingly encouraged. The high ceilings are explosive, but I found the finishes too bitty-piecey and contrived. We also caught sight of Siza’s tea house and rock pool from a tour bus; I would have loved to get out and look at them, but we couldn’t, and that’s all of the Porto school that I saw. When traveling with a non-architect, you have to make some sacrifices, and I’m not complaining — J is good company and we didn’t have enough time. Hopefully I’ll be able to travel as slowly as I like in India.